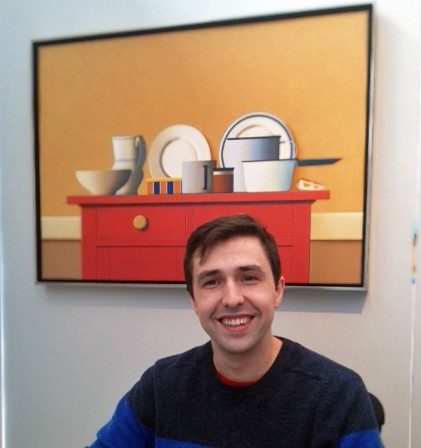 We just received these exquisitely rendered sculptures by rising international star Blake Ward. Originally from Edmonton, Blake’s studio is now located in Monaco, a prime area for a lover of classical art to be surrounded by two and a half millennia of historical art tradition. Quarried from the Massa and Carrara province in the Northern Tuscan region of Italy, Blake used Carrara marble for these two pieces – the same medium the iconic Michelangelo Buonarotti insisted upon when creating his masterpieces La Pieta and David. By sculpting in this classical mode with a historically rich material, Blake places himself and his work in a dialogue with the vast tradition of art history; his work existing as a timeless yet contemporary homage to the Greek and Italian legends that preceded him. A common theme which emerged during the Renaissance, Blake employs the female body as a metaphor for creation, life, and art as an ideal. The naked, twisting body emerging from the raw marble block is self-referential in its acknowledgment of materiality and reinforces the notion that the feminine form, in all its fecundity and creative potential, is the pinnacle of possible aesthetic achievement whilst remaining the most natural thing in the world.

The Greeks typically reserved the nude for the male body while female statues were carved with modest drapery because depicting the feminine form was considered pornographic up until the late Classical/Hellenistic period. Similarly, during the Renaissance, nude women and religious subject matter did not mix. However, because the Renaissance was born out of a rediscovery and admiration of Ancient Greek culture the nude came to represent a type of intellectual sophistication. Therefore, female nudity in art was deemed acceptable but only when depicting mythical or allegorical figures, in particular the “idealized” vision of Venus, and was often placed in relationship to the landscape to invite comparisons of fertility – much like Blake’s work here in which the body and landscape are one and the same. Thus, with these sculptures Blake reframes our relationship with the nude by creating them in the present day – granting them a sort of anonymity, effectively allowing the ideals and grand statements they represent take precedence, though on a modest and intimate scale.